For some odd reason I didn’t consider writing out Roma’s birth story. Since I was having a scheduled cesarean it didn’t feel like there was much to tell other than I went in, they numbed me and then a few cuts and badda bing badda boom we had a BABY!! Thankfully I have awesome friends who remind me that no matter how a baby comes into this world, the story and adventure is still unique and wonderful. 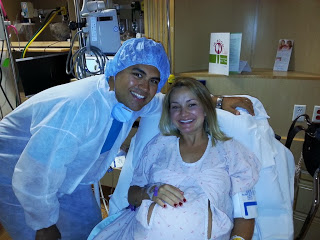 The night before my c-section Hector and I told Eliana we were taking her out for a special farewell dinner. We had spent that whole weekend saying goodbye to our current family dynamic and opening up the door for the new one that was coming. It wasn’t a sad celebration, but we wanted her to understand that it wasn’t just going to be the three of us anymore. That another addition was coming and that she had big responsibilities ahead of her.

We ended up at BJ’s because anything worth celebrating or saying farewell to deserves pizookie! (If you don’t know what I’m talking about I am so so sorry). Oddly, I was calm and full of peace the whole night. We put her to bed knowing it would be our last time the concept of just the three of us existed. It was bittersweet. We read a story, said our prayers and then said goodnight.

The next morning I got up, showered, shaved my legs, straightened my hair, put on makeup and glitter lotion (yes, sparkly glitter lotion all over my belly) and headed to the hospital. I thought at some point I’d be wigging out. But as was my experience with natural labor during E’s birth I had hit that focused, inner-calm-mentality. I was ready. I was going to do this. And I would stop thinking about the giant ass needle that would soon penetrate my spine.

We checked in, signed a billion papers and then kicked it for two hours. My sister showed up in just enough time to provide comic relief via music since my Dr. was thirty minutes late. Every minute that ticked by after my originally scheduled 11:30am appt was another minute I should’ve been closer to being done, but was unfortunately just sitting in a hospital gown waiting… and waiting… and waiting. The needle growing larger by the second.

Finally, when my Dr. showed I had to be ready. It was now or never. My anesthesiologist joked about running away… little did he know how much I actually wanted to.

As they wheeled me into the bright white operating room, with that wonderful fresh sterile scent all I could think about was the bug bite I found on my butt that morning and whether or not the anesthesiologist would be able to see it when I turned onto my side. I even considered putting cover up on it, but thought a dark creamy spot would look more awkward than a red irritated dot. Plus, I’m sure he had seen worse butts. Or hoping he had seen worse butts. The likelihood was high, right?

So there we were. A dozen bodies running about this bright white room with absolutely no concern that they would be cutting several layers deep into my abdomen and then pulling out a baby. I mean we went into the room as a team of 12 and would be exiting with one extra! They all seemed so calm, chill and routine. I wanted to scream. Make sure none of them had been drinking the night before. Ask my Dr. if she was sure she was prepared to do this. END_OF_DOCUMENT_TOKEN_TO_BE_REPLACED

I’ve been mulling over a lot of things recently, the most obvious one being my ever growing belly. Every woman who has ever been pregnant or who is pregnant thinks about their delivery. How they will deliver, where they will deliver and the big giant question mark of when will that day come?

Since this is my second go around I’m not nearly as consumed with things as I was before, but I’m also not going the natural midwife route so it changes things. It changes lots of things.

The biggest change has been people’s opinions and honestly their lack of support. Not that I had 100% support when I went natural because honestly people are life-sucking bastards and they apparently feel the need to educate you on their subjective reasoning no matter your personal circumstances. I distinctly remember someone downgrading what my experience would be because I was refusing drugs it went a little something like this… “Why go through all of that pain when it’s so much easier with drugs. I think you’ll regret doing it natural. It’s not worth it.”

And I am so done.

I am pretty sure I just made up the term “rationally-irrational”, but sometimes double negatives are a necessity in life.

If I could explain to you how I feel via nursery rhymes it would go something like this….

Now I know your utterly confused, but stick with me here. Most people would assume that after having one kid the second would be a walk-in-the-park. Sort of going with the whole been-there done-that mentality. And of course there is that concept that Mother’s apparently forget what goes on in the delivery room and that’s why we end up rushing to have a 2nd, 3rd and possibly even a 4th, when just 9 months before we were literally wondering why we ever decided to have children in the first place, as you attempt to push a 26 cm head out of a 10 cm hole.

But as much as I would like to think I have forgotten, I don’t really think I was blessed with this so-called delivery amnesia. And to be honest its not really the delivery that was the problem for me, but more-so the post-delivery circumstances that have my panties in knots whenever I even remotely entertain the idea of getting a sperm to reach one of my eggs. Seriously, I have to work hard to suppress the mild anxiety attacks that threaten to overwhelm me and to top it off these feelings are intermixed with the giddiness & joy of adding to our family. Which, I dream about often and want more then anything else in the world (except possibly our trip to Italy in the fall, kidding, well maybe just a little bit). END_OF_DOCUMENT_TOKEN_TO_BE_REPLACED