For some odd reason I didn’t consider writing out Roma’s birth story. Since I was having a scheduled cesarean it didn’t feel like there was much to tell other than I went in, they numbed me and then a few cuts and badda bing badda boom we had a BABY!! Thankfully I have awesome friends who remind me that no matter how a baby comes into this world, the story and adventure is still unique and wonderful.

The night before my c-section Hector and I told Eliana we were taking her out for a special farewell dinner. We had spent that whole weekend saying goodbye to our current family dynamic and opening up the door for the new one that was coming. It wasn’t a sad celebration, but we wanted her to understand that it wasn’t just going to be the three of us anymore. That another addition was coming and that she had big responsibilities ahead of her.

We ended up at BJ’s because anything worth celebrating or saying farewell to deserves pizookie! (If you don’t know what I’m talking about I am so so sorry). Oddly, I was calm and full of peace the whole night. We put her to bed knowing it would be our last time the concept of just the three of us existed. It was bittersweet. We read a story, said our prayers and then said goodnight.

The next morning I got up, showered, shaved my legs, straightened my hair, put on makeup and glitter lotion (yes, sparkly glitter lotion all over my belly) and headed to the hospital. I thought at some point I’d be wigging out. But as was my experience with natural labor during E’s birth I had hit that focused, inner-calm-mentality. I was ready. I was going to do this. And I would stop thinking about the giant ass needle that would soon penetrate my spine.

We checked in, signed a billion papers and then kicked it for two hours. My sister showed up in just enough time to provide comic relief via music since my Dr. was thirty minutes late. Every minute that ticked by after my originally scheduled 11:30am appt was another minute I should’ve been closer to being done, but was unfortunately just sitting in a hospital gown waiting… and waiting… and waiting. The needle growing larger by the second.

Finally, when my Dr. showed I had to be ready. It was now or never. My anesthesiologist joked about running away… little did he know how much I actually wanted to.

As they wheeled me into the bright white operating room, with that wonderful fresh sterile scent all I could think about was the bug bite I found on my butt that morning and whether or not the anesthesiologist would be able to see it when I turned onto my side. I even considered putting cover up on it, but thought a dark creamy spot would look more awkward than a red irritated dot. Plus, I’m sure he had seen worse butts. Or hoping he had seen worse butts. The likelihood was high, right?

So there we were. A dozen bodies running about this bright white room with absolutely no concern that they would be cutting several layers deep into my abdomen and then pulling out a baby. I mean we went into the room as a team of 12 and would be exiting with one extra! They all seemed so calm, chill and routine. I wanted to scream. Make sure none of them had been drinking the night before. Ask my Dr. if she was sure she was prepared to do this.

And then I was in the fetal position, legs pulled up into my chest, wondering just how much this was all going to hurt. How awkward not feeling would feel. Would I be able to sense my breathing. Would I have an adverse reaction like vomiting all over myself or would I not respond to the medicine and feel everything. I racked my brain with questions as the anesthesiologist gave me a local and then told me the needle was in my back and I would feel the anesthesia immediately.

I couldn’t stop picturing my spine with some six inch needle sticking out. And then I went numb. Not everywhere and not all at once, but like falling asleep on the couch with a cool breeze on a summer day. One minute you’re awake, the next you’re blinking slowly and then boom you’re asleep.

They rolled me over onto my back and the entire room was moving quickly, but in slow motion. My movements felt exaggerated and heavy, but the dr’s, nurses and assistants all buzzed around like bee’s. At first I felt great, but then I felt numb. I did not like not feeling. It’s not for me.

They called for my husband to join me and thirty seconds later were announcing that the baby was coming.

I didn’t feel a thing obviously, but at that moment I told my husband I didn’t want anymore. I could feel pressure and tugging and yanking, but no pain. And yet I hated this non-feeling more than I hated feeling. It was weird and hard to process.

And then someone yelled baby. And my husband’s looking over this blue curtain in order to yell out the sex and all I could do was blink slowly and tell myself it would all be over soon.

The anesthesiologist was rubbing my forehead, asking me how I felt. If I was okay etc. I just nodded. He asked me what her name was and all I did was cry. It’s all I could do. I took in two deep breathes and tried to sound out her name, but no words would come to my lips. Only tears. Warm, wet, happy tears fell from the corners of my eyes as my husband looked down at me and said, “Her name is Roma. Roma Eve.”

I smiled as he was whisked away to cut the cord and I was left numb on the table so they could stitch me back up. I couldn’t see anything, but I heard her cries. Her big, loud, boisterous cries that screamed out, “Hey! Put me back in!!” 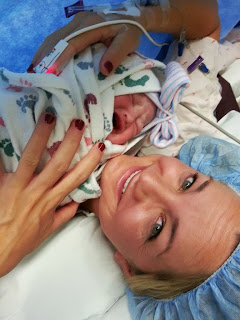 After a few moments her wailing subsided and my sister was brought in while my husband left with Roma to be weighed and measured. She held my hand and asked me if I was okay. I nodded again. I could feel them working on me more now. “We’re almost done Melissa. Just a few more minutes.” I blinked and looked at the bright lights in a haze.

My sister continued to rub my hand, asking me questions and watching as the surgeons did their work (she likes that stuff). She watched them stitch me back up after delivering Eliana, only it was in a more southerly location. It made sense to have her here for this.

And then I’m being switched back onto the bed they wheeled me in on and out the door. My sister placed her phone next to my head and Robin Thicke’s Blurred Lines rang out through the hallways. I smiled, my head started to bob and although I couldn’t feel my toes I knew they were dancing.

I sang along to the music and thought to myself… I did it. I have staples in my belly and can’t move my legs, but I did it!

I‘m wheeled into the room and see my husband. We both smiled. A little wistful, a little lost. We got another girl. Another girl. What’s that going to look like when they get boobs and periods and boys want to start coming over? He was holding her tightly wrapped little body against his chest and I witnessed this moment. It’s the, “I don’t know what we’re going to do, but damn we made this?”

He handed her to me so I could do skin to skin and get her breastfeeding. She greeted me without difficulty and nuzzled my chest. The feeling was starting to come back in my legs now. Slowly, but surely. And along with it came this new feeling in my heart.

You are mine and I love you.
No matter what.