If there was one word that would be considered an antonym of my life I think depressed would work quite well. There is hardly a day where I do not have a smile on my face and even on my worst days I feel like I can still make the sun shine out of my ass (props to Diablo Cody and Juno’s Father – one of my favorite lines in that movie and my apologies to those who think ass is a rather terse word – I am quoting someone else so be mad at them).

Anyway to get back to the point at hand depression. Apparently depression hurts and Cymbalta can help. I used to think commercials for medicine that healed depression were for the weaklings of the world who just couldn’t get their lives together and be happy. Now after having a baby and experiencing early onset Postpartum Depression aka The Baby Blues I humbly apologize to those who are affected by depression every day. It’s no laughing matter. 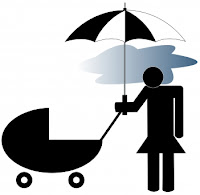 I know most of us have all heard the term “Postpartum Depression” and generally its not something most people, I think, would like to admit having. I don’t know why the world we live in likes to sugar coat everything in life and make it seem that everything is peaches and cream. Because guess what… it isn’t. If I truly tried to describe to you all how I felt during the first 3-4 weeks of Eliana’s life I am afraid I might scare some of you away from ever having kids. But I think I am going to take my chances and risk telling the truth instead of candy coating it. This way if you find yourself in similar shoes you won’t think your a crazy bad person who doesn’t love their child and is on the brink of a mental breakdown. So be forewarned my words might act as birth control.

So let’s begin with the definition of Postpartum Depression (PPD). PPD is a temporary depression related to pregnancy and childbirth. It comes in two forms: early onset, commonly referred to as the “baby blues,” and late onset. The early-onset type is mild and may affect as many as 80% of women after they deliver. It starts after delivery and usually resolves within a couple of weeks without medical treatment. The later-onset form is what most people think of as “postpartum depression”. This more severe form is usually recognized several weeks after delivery. Overall it affects about 10%-16% of women.

I place myself in the “baby blues” department of PPD, however I believe I teeter-tottered towards late-onset PPD, but thankfully was able to pull it together after 4 weeks. For those of you have truly experienced a prolonged form of late-onset PPD… I do not envy you. The medical world describes symptoms of the “baby blues” as including sadness, anxiety, tearfulness, and trouble sleeping. These symptoms usually appear within several days of delivery and go away within 10-12 days post delivery. Usually the only treatment needed is reassurance and some help with household chores and the care of the baby.

I say usually because this is where I place myself between the baby blues and late-onset PPD. I don’t even know if I can fully describe how I felt since feelings can be so subjective, but basically life sucked and I wasn’t prepared.

Since Eliana was in the NICU for her first week that part wasn’t that bad. However weeks 2, 3 and 4 felt like I was in the twilight zone. Everyone tells you to sleep all you can before you deliver because you will never sleep again. There is some major truth to that statement. But it’s so much more than that. Not only was I physically exhausted from the lack of sleep and from breastfeeding, but I felt like I was mentally losing it. I remember taking a walk with Hector while my sister was watching Eliana and I just started to cry. I had so many emotions streaming through me and I was afraid that if I was honest with him he would be scared and think that I really was losing it (even though I sort of was).

For starter’s I felt very little love towards Eliana. I knew I loved her, but loving her was a whole different ball game. All she did was feed, sleep, cry, poop and repeat. It sounds simple enough, but I really started to believe that I was not cut out for motherhood. I started to rethink my plans of having a big family and I started feeling the worst anxiety and fear that it was going to be like this forever…… and ever…… and ever. My life as I knew it had ended.
I tried really hard to play it cool those first few weeks. Whenever we had company over I put a smile on my face and some blush on my cheeks. I tried my hardest to look like the happy new mother who was utterly enraptured in her child, but inside I felt this big dark expanse of emptiness. Thankfully the days were easier then the nights, but the nights… oh the nights. They were hell on a shiny silver platter.
I started to wonder how in the world people had more then 1 child…
And then it was Sunday, the last day I would have Hector with me before he went back to work. The internal tears of fear were flowing and I felt a flood was about to ensue. I told him I had no idea how I was going to survive without him. Luckily, I have an amazing husband who had zero doubt in my ability to take care of our child, but I on the other hand had all the doubt in the world. That first Monday came and went and somehow I did survive.

My exact situation might have been worsened considering the extent to which delivering Eliana had destroyed me downstairs. I read a lot about other women who had undergone severe tearing and that it was common to have depression. I mean when peeing and pooping (life’s simplest tasks) become as time consuming and exhausting as running a marathon its no wonder one would start to have an Eeyore complex. 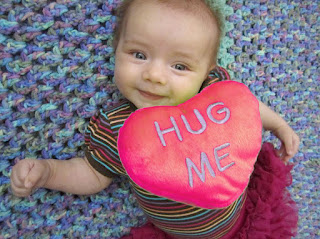 However, with the bad definitely came the good. At 4 weeks Eliana finally gave me my first real smile. Not a gas induced crinkling of her lips that you thought was a smile. And it was like all my fears, insecurities, worries, frustrations and exhaustion just melted away. It was at that moment that I finally fell IN love with my daughter. She also started sleeping through the night right around that time and it was MAGNIFICENT.

Sometimes I wonder why in the world God would make those first weeks/months so difficult for parents. I mean I understand the whole pain in childbirth situation, but couldn’t we get a small reprieve after accomplishing something as wonderful as BIRTHING a child?! But now I see that its all a part of the big picture. If it wasn’t hard, if we didn’t lose sleep, if it was as easy as pie – then our love for our children wouldn’t be as fierce as God had intended. We would take them for granted and we wouldn’t go to the ends of the earth to protect them and provide for them. Because I can tell you wholeheartedly without a single doubt in my mind I would give up ANYTHING and EVERYTHING for that little 15lb chunker sleeping just mere steps away from me. 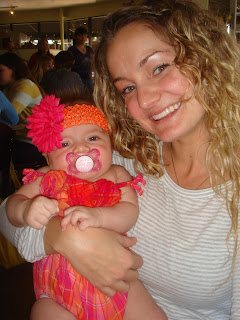 My Lexus? Here are the keys. Our condo? let me just shine those floors for you first. Our beautiful San Diego location? cars packed and I am ready to move… To Minnesota in the Winter? sounds superb! Trips to the mall? Vacations? Fancy Restaurants? Whatever you want… its yours as long as I get to keep her.

So when I look back at weeks 2, 3 and 4 of her life I can still see the dark cloud that hovered above me, but I can also see the sun trying to break through. I wish I had been more prepared for what to expect during those first few weeks, but in the end I am glad to know that life has only gotten sweeter.

People complain and say that kids change things and that life will never be the same. But isn’t that the whole point? Ask most people over 80 years of age if they could be 21 forever and they would say No. Every season in life has its time and its place. I would hate to look back at my life and regret not having kids just so that I could sleep more or travel more or have a higher disposable income. Life is about relationships and the things you do with people through those relationships. I would hate to be on my death bed and have my final thoughts be… “Well at least I drove a bad ass Ferrari”.

Although if I could have all of thee above and a Ferrari I wouldn’t complain.